The City of Cape Coral has over 400 miles of canals, more than any city in the world.

Gator Dredging was awarded a $3.2 million dollar contract on March 26, 2012 to perform canal dredging for shallow canals in the Southeastern quadrant of the City of Cape Coral.To determine the scope of the work, canals located in the Southeast quadrant totaling 114.5 miles were surveyed under the city’s waterway management program. Of these surveyed canals, 51 were determined to have of depths less than -5 ft mean low water. Subsequently, Gator Dredging was contracted for the dredging and disposal of over 47,000 cubic yards of accumulated sediment from these Southeastern canals.

As of year-end 2013, Gator Dredging successfully completed three years’ worth of dredging in two fiscal years. The project, which only began in April 2012, has accelerated rapidly as Gator Dredging has already successfully removed over 50,000 cubic yards of sediment from a total of 55 canals! Due to the success of and satisfaction with the project, the City of Cape Coral has awarded Gator Dredging an additional $1 million for work in the Southwest Quadrant of Cape Coral to be completed in FY2014. 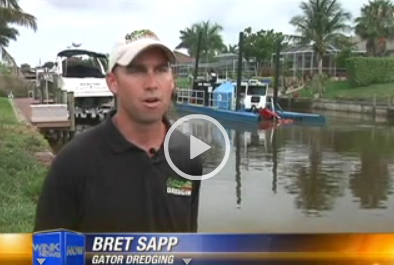 Gator Dredging is committed to providing Cape Coral residents the opportunity for individual boat/slip dredging. Contact us today for a free estimate.

Are you a waterfront resident of Cape Coral, FL and in need of individual slip dredging?